We all share the dream of flying in the Olympic Games and there are some great advocates already sharing the message.  For some of the younger generation that bless our sport, this dream took a small step towards becoming a reality when the French Parachute Federation (FFP) announced at the International Parachute Commission (IPC) plenary meeting in January 2018, that they are attempting to get Indoor Skydiving included in the 2024 Paris Olympic Games. The proposal was supported by the IPC and the Federation Aeronautique Internationale (FAI), and iFLY have partnered with the FFP to host the event at iFLY Paris, which is already centred in the proposed Olympic Park area.

Reality Check?   Is this just a pipe-dream or could it really happen? When we announced this on social media, it attracted a mix of comments, ranging from “wow, let’s do it” to “that will never happen as it doesn’t meet the criteria”.  So, I thought it would be useful to explore what it takes to get a sport into the Olympic Games – you can then make up your own mind about the reality for Indoor Skydiving.

There are currently 33 sports within the Olympic summer programme in Tokyo. The number of sports vary and are constantly reviewed and 5 new sports are included in the 2020 Tokyo programme; Baseball/Softball, Karate, Surfing, Skateboarding and Sport Climbing; 3 more could also soon be added.  There are 2 main pathways to the Olympic Games.

The first (Traditional) way is for a sport’s international federation to petition the International Olympic Committee (IOC) and to do this the IOC must first “recognise” the sport with membership of the Association of IOC Recognised International Sports Federations.   This requires the sport to be administered by an international non-governmental, not-for-profit, organization. The sport then achieves International Sports Federation (ISF) status which includes the requirement to enforce a number of rules set forth by the Olympic Charter, such as the Olympic Movement Anti-Doping Code.  This group includes sports that may be “recognized” by the IOC, but not currently in the Olympic sporting programme – the 2 are different and this is effectively a list of sports that includes those that could possibly be added to the Olympic programme in the future.  For example, Cheerleading is within this category – it is “recognised” but it is not in the Olympic programme.

What criteria do we need to meet?   The second step within the Traditional way is for the International Federation to be a Member of The Association of Summer Olympic International Federations.  This is a demonstration that the sport can meet a range of criteria which include: venue legacy, gender equity, global participation, popularity as measured by TV audiences and social media, event attendance, plus many more, including new criteria such as “appeal to millennials”, which helped with the recent inclusion of surfing and skateboarding.  The sport must also increase the ‘‘value and appeal” of the Olympic Games and retain and reflect its modern traditions.  The sport must also be practiced by men in at least 75 countries and on 4 continents, and by women in no fewer than 40 countries and on 3 continents. There are numerous other rules, including bans on purely ‘‘mind sports” and sports dependent on mechanical propulsion, and it is these rules have kept parachuting disciplines, chess, automobile racing and other recognized sports out of the Olympic Games.

The Alternative Approach – The Lifeline for Indoor Skydiving

At first glance, this list of criteria means that Indoor Skydiving has a long way to go before it can satisfy the “Traditional” route to the Games – in fact some of these rules are impossible to satisfy, so why bother?

The second (Alternative) way is for the Organizing Committees of Olympic Games (OCOGs – the Host cities) to support favoured sports in their country. In Paris, this body is known as the Comité d’ Organisation des Jeux Olympiques (COJO).

It is important to note that the Olympic Charter is reviewed after each Games and the current Charter permits proposals for the inclusion of one or more additional events for that edition of the Olympic Games. Tokyo 2020 is the first host to take real advantage of this and they supported the inclusion of the 5 new sports that they considered would be popular with the locals, will boost TV ratings and will attract more sponsors. Twenty other sports, were also considered, but rejected for 2020, including Bowling, Chess, Korfball, Sumo, Tug of War and Wushu – (no prizes but can you guess what this is?). The 5 new sports may well be one-offs and their continued participation will be reviewed after the Games.

This “‘Alternative” approach is the opportunity that the FFP have taken for 2024 and they are actively lobbying Ministers for Sport and the COJO, to seek their support for the inclusion of Indoor Skydiving.

Neither process guarantees regular participation – Baseball has been included for single Games (Atlanta 1996), removed and then re-instated for 2020 based upon popular appeal in Japan. However, it is also evident that not every current sport meets all the criteria within the selection process. Rugby 7s is a good example; their marketing model, spectator and TV appeal, along with the successful business model of World Rugby, has delivered Olympic success in a sport with less than 10 serious contenders for medals.

The pathway to the Olympic Games is complicated and bureaucratic and we have a long journey ahead, but let us look at the positives that make the “Alternative” route to the Games a possibility. We have an International Federation (The FAI) that is recognised by the IOC and who are supportive of the French bid.  Theoretically the discipline of Indoor Skydiving is a recognised discipline within Air Sports and the growing popularity of Indoor Skydiving presents the FAI with an opportunity that they appear to be embracing.  The energy of the FFP in spearheading this approach with the Paris Organising Committee is crucial and if they achieve support for inclusion, then we are genuinely on the pathway to success.  The arrival of the French Minister for Sport at the Clash of Lyons in January was certainly not a coincidence and neither was the award of the 2019 World Championships in Weembi Lillie.  The facility at iFLY Paris is a perfect venue and it satisfies the important legacy criteria, so although we have some way to go, we should note that not every current sport meets all the criteria, so it is not impossible.

This the best opportunity that we have ever had and it is not limited to Paris in 2024, as there is also a suitable tunnel in the host city for 2028, Los Angeles, so even if Paris is not successful, the Dream of Olympic flight lives on.  So, have you decided?  Either way I’m sure we are all united in embracing the positive energy from France and that we are all ready to play our part in realising the Dream.

Indoor Skydiving to the Olympic Games of Paris 2024 (Video)

After more than a year of work the French Parachuting Federation, in close connection with the International Aeronautical Federation (FAI), officially applied to the Olympic Games Organizing Committee to propose indoor skydiving for inclusion in […]

Flyspot Proudly Presents the Windtunnel Olympics 2016 Bolt may be fast but can he run upside down? Would Phelps have a chance to win if it would be about swimming in a bowl of […]

There are no upcoming events at this time. 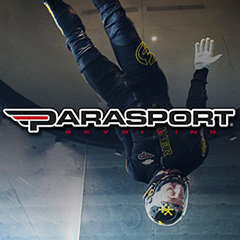